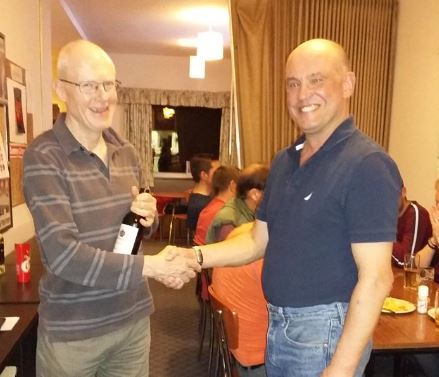 Teams in some of the League’s larger divisions, however, have had to content themselves with a break of only three weeks in order to fit in the necessary additional matches.

Division Four South is one such section – containing, in Bollington 2 and Prestbury 3, two sides from our local clubs. And, as scheduling fate would have it, they played against each other at Bolly’s Leisure Centre last Thursday.

Promotion-chasing Bollington turned out in strength – with a top three comprising Rick Walters, previously unbeaten this term at Fourth Division level, as well as Stuart Arnold and Mark Collins who had only lost one match apiece during the first half of the campaign.

The trio duly delivered, as each player enjoyed a straight-games victory. Aldo Palazzo, without a defeat in two months, did likewise at fifth string. And although the experienced fourth-stringer Malcolm Kendrick conceded the first game of his contest against Prestbury’s Graeme English, he also prevailed to ensure a clean sweep for the ‘Bolly Seconds’.

The festive period proved doubly productive for Bollington, who, back on 15 December, had hosted, and secured another 5-0 triumph against, Crewe Vagrants 4. Rick Walters, Mark Collins, Malcolm Kendrick and Aldo Palazzo were all once again victorious, while a walkover-win for Olli Stewart completed the rout.

These two maximum points-hauls have seen Bollington go up a place to second, and surge nine points clear of their nearest challengers as they seek further to cement themselves in the promotion frame.

Prestbury 3, meanwhile, lie at the other end of the table in 12th. But the ‘Thirds’ could yet see their position improved to the tune of two places – which, crucially, would take them one above the drop-zone – in the event of a successful appeal concerning the match they played on 15 December at Alderley Edge.

The match, against Alderley 5, was won 4-1 on the night by Prestbury, thanks to victories for Mike Quartley, Andrew Worsley, Rob Thorneycroft and Graeme English. But a ruling over player eligibility – ironically, given the scoreline, under Regulation 4.1 – led to the League’s award of the match to the hosts and deduction of points earned that evening by the ‘Thirds’. Prestbury’s appeal will be heard by the NWCSL Disputes Committee at a later date.

Finally, and on a positive note, Prestbury have successfully trialled live tweeting of the club’s matches on Thursday nights. Going forward, news and updates will be posted on the @PrestburySquash Twitter account throughout match-nights for the remainder of what promises to be an interesting second half to the season!