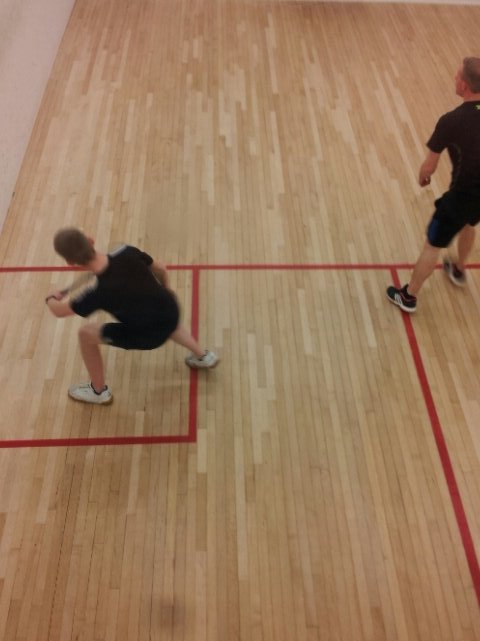 With the North West Counties League’s winter season having run approximately two thirds of its course, there were some critical matches for a number of the local men’s teams last Thursday 26th January.

And this was no more true than in Division Two East, where Bollington’s First Team travelled ‘over the Edge’ needing a big win against bottom-placed side Alderley 3 to ease the threat of relegation.

The ‘Bolly Firsts’ duly delivered, as Chris Ogdens Junior and Senior, Brig Simpson, Oli Cunningham and Rick Walters all won to ensure a 5-0 victory, maximum points and a one-place improvement in their league position to eighth. The result also ended an eight-match sequence of alternate wins and losses (not that they will be complaining, of course!).

Further up, in mid-table, Prestbury 1 remain sixth and searching for a first triumph for 2017, after losing by the odd match in five at Grove Park 2. Cousins Paul and Mike Lomas both won, but the ‘Firsts’ – for whom captain Nathan Mayers was forced to retire with a back injury two games in – were ultimately edged out by their hosts.

In Division Three South-East, Prestbury’s Second Team fared rather better against a Grove Park side. And by hosting and defeating the ‘Grove Fourths’ 4-1, the side moved up a place to seventh – with Chris Dunkerley, Stuart Melia, Andrew Worsley and Paul Bartle all triumphant.

Macclesfield Squash 1, meanwhile, remain the divisional basement team – although, for a third successive week, suffered the frustration of losing 3-2 in spite of victories for top two players Adam Colebatch and James Douglas. Their latest defeat, against visitors Alderley 4, leaves them some 36 points away from safety.

The ’40-pointer’ of the week saw Bollington 2 play host to Division Four South promotion rivals Radbroke Hall 1, and, by the narrowest of margins, went the way of the ‘Bolly Seconds’. They move up two places, and leapfrog their opponents for good measure, following victories for Lyndon Stonier, Stuart Arnold (who won the decisive final match) and Mark Collins.

At the other end of the table, Prestbury 3 picked up some valuable points thanks to wins by acting captain Kevin Wynne and the returning Nick Barker – but remain 12th and in the drop-zone after going down 3-2 against visitors Crewe Vagrants 4.

The race for the single promotion-ticket out of Division Five South is hotting up, after leaders Prestbury 4 lost for only the second time all season. Travelling to Alderley Edge, the ‘Fourths’ found themselves up against an exceptionally strong Seventh Team, and were beaten 4-1 – with captain Gareth Evans earning their sole win of the night.

Second-placed Bollington 3 took advantage at Disley 2 – prevailing by the same score to narrow the gap at the top to just seven points. Aldo Palazzo, Gareth Ainsworth, Martin Ogden and 12-year-old George Lomas all won. And junior debutant George sealed a memorable evening by taking the match that guaranteed his side victory.

Prestbury 5 remain sixth after losing for the second Thursday in a row, as visitors Buxton 2 ran out 4-1 winners. In-form junior player Greg Stanger (17), who has now tasted defeat in only one of his last eight matches, registered a consolation success for the hosts.

And Macclesfield Squash 2 inch up a place to eighth, despite suffering a fifth successive loss. Annika Hall and Simon Fisher both won at New Mills 2, but their team must wait at least another week for a first victory since mid-November after going down 3-2.

Three days earlier, Bollington and Prestbury each achieved a Cheshire Ladies League triumph for the second Monday running. Sixth-placed Prestbury’s position in Division Two now looks increasingly safe, following a 3-2 victory over visitors Alderley 2 – with Fran James, Sarah Lonsdale and, for the first time, Eloise Thompson all securing wins. And Third Division Bollington, in fourth position, earned maximum points courtesy of a walkover when The Northern 3 were unable to raise a side for the journey down into Cheshire from West Didsbury.