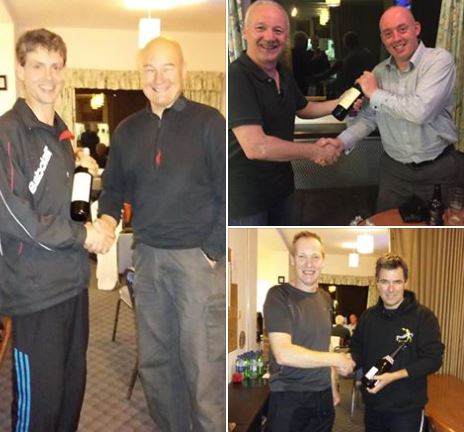 Last Thursday saw the final full set of pre-Christmas fixtures completed in the men’s North West Counties League – with varying fortunes for the 11 teams from our three local squash clubs.

Both sides in Division Two East did well against testing opposition to sign off at the season’s halfway-stage with 3-2 victories. Bollington 1 made the trip to Didsbury to take on fourth-placed Northern 2 – where Chris Ogden Senior, Brig Simpson and, for the decider, Lyndon Stonier all performed heroically to win their matches by the odd game in five. The ‘Bolly Firsts’ move up a position to eighth as a result – and will feel comforted to remain above the drop-zone (albeit just four points clear of it), going into the new year.

Prestbury 1, meanwhile, stay sixth after hosting and beating Hyde 2. The Tameside club, in spite of a lowly league position, fielded a strong line-up that included two First Division regulars who both won – but Paul Lomas, Mike Lomas and Rob Alcock all took care of their respective opponents to secure the honours for the home team.

Division Three South-East featured a local derby at the town’s Leisure Centre between Macclesfield Squash 1, at the bottom of the table, and eighth-placed Prestbury 2. Prestbury’s ‘Seconds’ considerably eased any relegation fears of their own by winning 4-1, as 3-1 victories for Brian Lomas, Chris Dunkerley and Stuart Melia, together with a straight-games triumph by captain Mike Quartley, saw them prevail. Robin Thorpe registered a consolation success for the hosts after edging the third-string match 3-2.

In Division Four South, Bollington 2’s promotion campaign was boosted by an emphatic home defeat of the leaders, Knutsford Sports 2. Rick Walters, Stuart Arnold, Mark Collins, Malcolm Kendrick and Aldo Palazzo completed a clean sweep of wins on the night to secure a third consecutive victory for their team, which sits four points off second place.

Towards the other end of the table, Prestbury 3 are still two points adrift of safety after losing 4-1 at Grove Park 5. Despite their reverse, the survival quest of the ‘Thirds’ was boosted by captain Rob Thorneycroft who marked his 300th recorded match for Prestbury with a valiant effort – albeit one that ended in a narrow final-game defeat – and by Kevin Wynne’s 3-2 victory at fifth string.

There was a second derby match of the evening at Macclesfield Leisure Centre, which saw Prestbury 4 return to winning ways, and extend their lead at the top of Division Five South to 20 points, after beating the hosts’ Second Team 5-0. Gareth Evans, Dave Jones as well as teenagers, Matt English (18) and Jonny Murray (14), all won, while a walkover-victory for Barry Jupp completed the rout.

Bollington 3 remain second, having visited Grove Park 8 and triumphed 3-2 – thanks to straight-games wins for Martin Ogden, 15-year-old James Walton and late replacement, Andy Barber, who bravely defied long-standing knee injuries to get the depleted ‘Bolly Thirds‘ over the line.

Prestbury 5, in sixth place, finished the first half of the campaign with a fifth successive win, beating visitors Disley 2. Phil Colville, Ben Parker, Dave Marwood and junior player, Greg Stanger (17), secured a 4-1 victory for the hosts.

Ninth-placed Prestbury 6 could not build on their good results of recent weeks, as the ‘Sixths‘, featuring three juniors, went down 5-0 at Alderley Edge 7. Harry Mattocks (15) did, however, provide a highlight of the fixture – not to mention great hope for the future – by winning a game on his competitive debut.